Unpredictable, fervently relevant, and compulsively consumable. Bjarne Melgaard is for the urban heart what coach bags were for your egotistical suburban mom. I can’t get enough.

Melgaard is the most famous Norwegian artist, and is often considered our generation’s Munch. Based on his exhibit record, it seems he seldom buckles down: jumping from city to city, and putting on exhibits with the efficiency I’ve only ever had for drinking beers in one sitting. His two current shows in New York are a continuation of his project “The Casual Pleasure of Disappointment.” which began in 2014, and tokened Melgaard’s transition toward fashion. The Cartoon Network-like characters, hair streaming from canvas, and absurd slogans like, “I’m Not a Piece of Shit, I’m a Piece of Society,” are continued in his current exhibition in collaboration with the jeweler, BJORG, at the Gavin Brown’s Enterprise Gallery, and his “psycho-pathological” department store at Red Bull Arts New York. 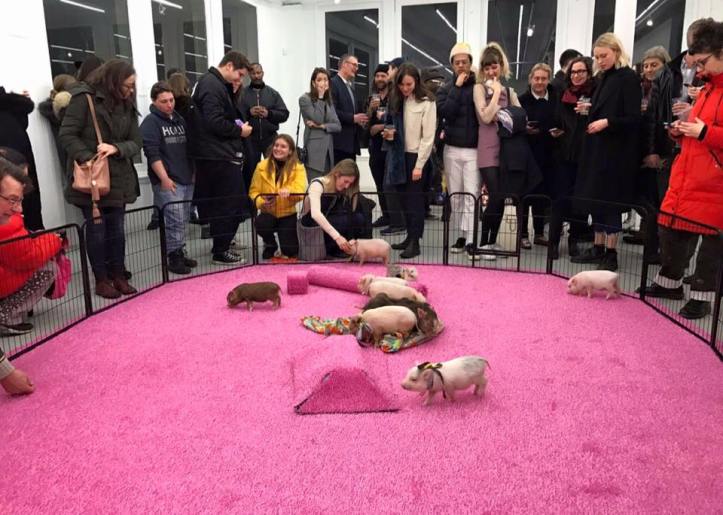 In NYC, a pen full of pigs wearing ribbons running free on a hot pink carpet is the most pure, intoxicating form of excitement you can get. At Melgaard’s and BJORG’s Gavin Enterprise opening the jewelry was given immediate glances, while the small pink critters running across the floor consumed all attention. I drank two Modelos, people watched and stayed to watch pigs for a full hour. I was intrigued to see not one, but two women wearing camo hunting jackets ironically(one paired with a monster beanie and LV purse), Chloe Wise(who has had notables like Jeff Koons check out her Canada exhibits, and is followed by Marc Jacobs on Instagram), and an entire room full of people willing to get on their knees for attention from a tiny pink animal. The jewelry reeked of Melgaard’s expressionism: hair streaming from bejeweled eyes, cats riding penises and my personal favorite chain which read, “I Just Want to be a Lesbian.” Not shy of bold color or utter ridiculousness, the pieces are gorgeous in their own twisted ways.

“The Casual Pleasure of Disappointment” is a never-ending cycle of interpretation: jewelry, a psychopathological department store. Melgaard kicked off his Red Bull Arts show with a Valentine’s Day “Purge,” giving away $500,000 dollars worth of his own designer clothing to those willing to wait in line(or fight) for it. The gallery is set up like a department store, with mannequins and clothing all of course in Melgaard’s absurd entertainability.

At Melgaard’s shows there are no blank expressions, no eyes staring into a void of space and form searching for some hidden revelation of goodness that will only surface through excessive eye-canvas contact and chin scratching. It’s art meant to be ravished. I can’t read a bejeweled necklace that says, “Lies to Make You Feel Better,” without feeling everything once equated to right and normal in my head being tickled a bit. This is also a man whose Instagram is mostly stocked with very tasteful posed photos of him with his mother. “The Casual Pleasure of Disappointment” isn’t one to miss out on. Red Bull NYC is open every Saturday, and the show is up till April 9th.