Looking for some interesting, new, and potentially pretty weird theatre in New York this weekend? This is the list for you. Here are three shows happening around (and just outside of) New York this week, and what to do while you’re out there. 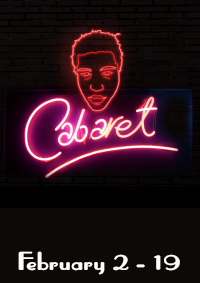 Starting off in Long Island City (you wouldn’t be complaining if I told you it was Queens, so let’s just pretend…) with Cabaret at The Secret Theatre. Cabaret, for those unaware, is the story of the barely-talented British cabaret singer Sally Bowles (played here by Natalie Walker) and her broody author boy-toy Cliff (Jesse Weil) as they navigate 1930’s Berlin. Set primarily in a small and seedy cabaret headed by the hypersexual Emcee (Larry Owens) and his staff of scantily-clad boys and girls, we see the Nazi party start to infiltrate the real world. The 99-seat house of the Secret Theatre seems the perfect setting for the intimate eccentricities of the play’s Kit-Kat Club setting. Dr. Tom Stevens calls the production an “unmitigated success”, focusing particularly on the casting of Larry Owens as the Emcee.

The show is directed by Hunter Bird, who worked recently on Our Mother’s Brief Affair on Broadway, and The Imaginary Menagerie at the McKittrick Hotel. Chloe Treat, of The Great Comet of 1812 and Heisenbeg” choreographs. The Secret Theatre is located at 44-02 23rd Street, Long Island City, 11101, and tickets can be purchased online for $20.

Next is Joe Charnitski’s Funeral at the Kraine Theatre (home of the Neo-Futurists) in the East Village. The show is described as a “long form storytelling show,” starting with the story of Joe Charnitski (the third) eulogizing his grandfather (Joe Charnitski the first) and his father (Joe Charnitski the second) eight years apart. Charnitski’s story Haunted, Abandoned and Afraid was featured on The Moth podcast, and you can find part of Funeral here. The show is obviously simple – one guy, presumably no set, in a 99-seat theatre, but Chartinski’s storytelling is nuanced and pretty hilarious – “You can imagine the horror, years later, when I realized I had stolen a line from Jerry Maguire and put it in my dad’s eulogy,” slides right into “He had this sharp, quick, smart wit, but he never used it as a dagger,” while he talks about his father’s funeral. You can find $10 tickets for this weekend here, and the show is running until March 2. For food before, after, or 24 hours any other day, go up to Veselka on 2nd Ave and 9th, a remnant of Little Ukraine (RIP), a place after my little heart both for serving Ukrainian food for being mentioned in Nick & Norah’s Infinite Playlist, which I read around age 12 and latched onto as how I thought I would be as a teenager. (I ended up spending most of my time in high school at home). Veselka serves Manhattan-famous pierogies, borscht, and other Ukrainian classics. Ultimately if you’re not sure, pierogies are little envelopes of potato and cheese and you’re going to like them. I like mine fried, my first-generation American grandmother likes hers boiled, so that’s probably more authentic but also a little soggy. Do what you will.

Finally, we have Everybody on the Irene Diamond Stage at the Signature Theatre. Everybody features everyone’s favorite aspect of theater – AUDIENCE PARTICIPATION. At the beginning of each performance, an audience member is selected by lottery to star in the show, so no performance is the same as the one before. Everybody is an adaptation of the Medieval moral play Everyman, in which the creatively-named Everyman attempts, essentially, to make himself look good in god’s notes. Everybody was written by MacArthur Fellow and Obie Award Winner Branden Jacobs-Jenkins, and is directed by Lila Neugebauer. Obviously the show features someone new every night, meaning I probably won’t see it, as being picked to be on stage is simply too big a risk. You can find the Signature at 480 West 42nd Street in Manhattan, and tickets can be found for $30 on the Signature’s website. If you’re looking for food and a little bit of a walk, find Pure Thai Cookhouse on 9th, between 51st and 52nd. They’ve got stir-fry, pad thai, and a ton of tiny little dishes. Of course, once you’re on 9th and in Hell’s Kitchen, you’ll pass a hundred restaurants worthy of your time.

Next time I’ll try to keep it out of midtown and probably out of the genuine mystery that is Long Island City, but if you’re part of any small theatre in New York and want to be checked out, let us know!